Mary Hayes Grieco has a daring and heartfelt mission: end unnecessary emotional suffering in the world. And, for good reason. There was a time as a young woman when Mary was utterly incapable of relaxing or enjoying herself because there was so much unrest inside her. The result of numerous traumas, abuses, random tragic losses and disappointments.

Mary grew up the oldest of eight children in an alcoholic home. When she reached her 20s, she was "pretty bashed up." She was often depressed, angry, scared, and shy, "sulking and skulking around." She knew she wanted to write a book, but had nothing to say. She felt a strong urge to help other people, but she couldn't help herself. She wondered what to do and if she would ever amount to anything. She was filled with anxiety and self-loathing, in a chronic state of suffering over nothing and everything, ill at ease within her own skin.

Then Mary's life changed forever when she decided to attend a woman's retreat. There she met Dr. Edith Stauffer who would become her teacher, mentor, role model and good friend. Dr. Stauffer was teaching people her recipe, her eight step method for getting over painful and disappointing things in life that she'd developed during 35 years as a psychotherapist. Mary watched people in Edith's workshops heal swiftly and completely, every time. She started her own healing journey and felt like a million dollars every time she used Edith's recipe to get over something old and difficult. She felt lighter and stronger, more like the strong, bright, wise person she always knew she was inside.

Mary got real excited about what she was learning and feeling and how her life was changing. She decided she wanted to help Edith take her work and her recipe into the world. She realized her life purpose is to be a teacher of the work and the method that had done so much for her. She embarked on a journey of learning and teaching that has taken her around the world to help thousands of people permanently heal the emotional pain from losses and disappointments in their lives. She's written the book she knew she was meant to write. In Unconditional Forgiveness: a Simple and Proven Method to Forgive Everyone and Everything, Mary walks readers through the recipe that helped her end her emotional suffering and live a life filled with peace and joy.

When Erin Warhol found her way into one of Mary's workshops, she was hauling around lots of old emotional baggage from a painful divorce and the shocking loss of being fired from her dream job. She was struggling with a stressful new job and coming to grips with the demands and the unexpected reality of being a single mom with little kids. She had a problem with anxiety that crippled her for a while. She had become really good at distancing herself from pain in her life. Denying it or deep-sixing it. Disappointing stuff would happen and she had this way of detaching from her emotional truths. That worked until it didn't work. She knew she was a mess. It wasn't fun. She was determined to somehow get over the pain she was feeling. She tried counseling and started reading spirituality books. She signed up for a big meditation class. She watched Oprah a lot. She really worked at it. She got better with her anxiety, but it was still there.

Erin's life began to change in that first workshop with Mary as she experienced Mary's recipe for getting over losses and disappointing things in life. She felt the pain and anxiety from stuff that had been bothering her for years begin to melt away. She realized Mary's method was the missing piece that she'd been looking for to feel good again about herself and her life.

Erin loved the amazing life-changing things she was learning from Mary. She was captivated by her fun-loving quirky personality and genuine, lighthearted, and disarming teaching style. Being a successful radio programmer, one day, she instinctively blurted out to Mary, "we're going to create a podcast because everyone needs this." And, the Rise and Thrive Show was born. 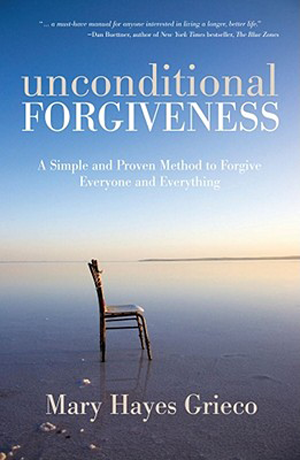 From tiny daily life frustrations to deep heartbreaks and world atrocities – the process of healing is essentially the same, and Mary Hayes Grieco walks readers through each of her Eight Steps to Freedom with clarity, compassion, and humor. A potent synthesis of her 25 years of living and teaching this method, this wise book is destined to be a perennial favorite as a reference guide for growth-oriented people or as a gift for people who are going through difficult times.

You can learn more about Mary's book, "Unconditional Forgiveness" or purchase it HERE.